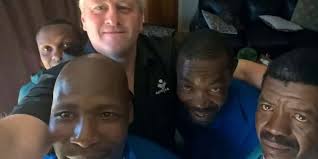 If the agricultural sector ever bought into the polarising push-back by conservative Afrikaner organisations, the land debate and any possible productive, solution-driven conversations will become redundant, writes Dan Kriek.

During a week of heated discourse about apartheid denialism, sparked by the EFF’s lambasting of FW de Klerk during the State of the Nation Address (SONA), my mind went back to my first meeting with President Cyril Ramaphosa in August 2018.

I was in my first term as chairperson of Agri SA, the largest agricultural body representing farmers from all backgrounds in the country.

It was eight tumultuous months after the ANC took the decision to amend Section 25 of the Constitution and no real dialogue between organised agriculture and the ANC had taken place.

It was a time of extreme uncertainty and anxiety in the agricultural sector.

To put it mildly, leading an organisation like Agri SA at the time was extremely challenging.

The meeting took place in Tuynhuys. We were seated in a boardroom awaiting Ramaphosa’s arrival. When he entered the room one could sense a certain aura or presence about him. He took his time to individually greet everyone around the table. I introduced myself as the Chairperson of Agri SA and a cattle farmer from the Free State.

Dan Kriek: "Ultimately, we cannot begin to solve big problems without connecting with each other first, and connection starts with acknowledging each other."

The President immediately smiled and said, "Well, I am a cattle farmer too, you know."

The discussion turned to our mutual responsibility to our beloved country with its deeply troubled past.

When it was my turn, I did not say anything about expropriation without compensation, the President knew that Agri SA took a strong stance against amending the Constitution.

Instead, I said the following: "Honourable Mr. President, I am going to say something to you that no other chairperson of Agri SA has ever said. We acknowledge that the colonial era, the 1913 Land Act and apartheid had a devastating effect on the lives of black South Africans, and that we as Agri SA will take co-responsibility with you to make progress with implementation of sustainable land reform and to rectify the injustices of the past."

The President was busy reading something when I started speaking, but he put down his pen, looked me in the eye and said, "You know Mr Kriek, more people should say what you just said now. If we do not solve the land question, we will never have stability in South Africa."

Why did I choose to say these words in a meeting about practical solutions to enable economic growth and job creation?

It wasn’t about saying empty words to impress anyone or "taking all the blame" on the shoulders of farmers or the agricultural sector.

To me, it was about trying to put myself in the shoes of another and taking a step toward acknowledgement of the suffering and hurt experienced by my fellow South Africans.

Ultimately, we cannot begin to solve big problems without connecting with each other first, and connection starts with acknowledging each other.

Firstly, I am convinced that the moral argument is just as important as the economic arguments.

At the end of the colonial era black South Africans roughly comprised 70% of the population but were left with only 7% of the land. The 1913 Land Act and apartheid policies all but entrenched the status quo for the next century.

Secondly, it is the closest that I can come to the words in our preamble to the Constitution.

We all have the responsibility to make those shared values come to fruition. The Constitution is not about retribution, but about transformative justice, inclusivity and opportunity for all.

We live in a vastly different world than a century ago, but the structural remains of apartheid are still there for all to see. We all know the efforts at sustainable land reform after 1994 failed miserably.

Yes, politicians are the ones who make the policies and can cause tumult with populist remarks and decisions, but the ordinary citizens of this country have the power to drive change by starting small in our own communities, by acknowledging each other, by connecting and starting to find common ground in everyday life.

I believe there is more than enough goodwill among moderate South Africans to find solutions to our problems and implement them successfully and sustainably.

Trust and cooperation between farmer organisations and government will be critical going forward.

The onus is on ordinary South Africans to have compassion with and to acknowledge and listen to each other in our communities. By showing understanding, we can mend our social contract, that important invisible bond making all South Africans strive for the best, and enable economic recovery from the ground up.

Many narrow-minded, race-based organisations would have us believe that being less "politically correct" and less tolerant is the way to go.

If the agricultural sector ever bought into the polarising push-back by conservative Afrikaner organisations, the land debate and any possible productive, solution-driven conversations will become redundant.

The outcome would be disastrous and we would never find mutually beneficial common ground and a recipe to work towards success and prosperity for all South Africans.

Isolating ourselves again based on race or language will in my opinion lead to ultimate failure.

Once we establish trust and tolerance, we can talk about the practical stuff and economics all day long.

** Dan Kriek served as president of Agri SA until 31 December 2019. He farms with South Devon cattle in the Eastern Free State.