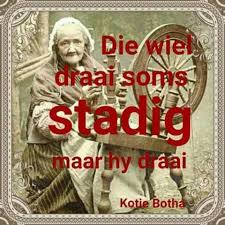 By JULIAN ROBINSON FOR MAILONLINE and REUTERS

It comes after Trump criticised the country's land reform plans in a tweet that touched on the overwhelmingly white ownership of farmland in South Africa - one of the most sensitive issues in the country's post-apartheid history.

According to President Cyril Ramaphosa, who himself farms cattle on a 5,100 hectare ranch, the white community that makes up eight percent of the population 'possess 72 percent of farms' 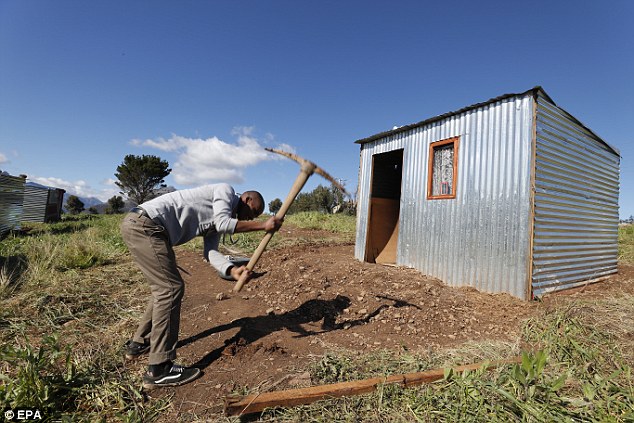 'I have asked Secretary of State... (Mike) Pompeo to closely study the South Africa land and farm seizures and expropriations and the large scale killing of farmers,' tweeted Trump to his 54 million followers.

His tweet apparently followed a segment on conservative Fox News about Pretoria's plan to change the constitution to speed up expropriation of land without compensation to redress racial imbalances in land ownership.

The country is in the middle of a racially charged debate over land reform, a lawful process that seeks to correct the legacy of decades of white-minority rule that stripped blacks of their land. 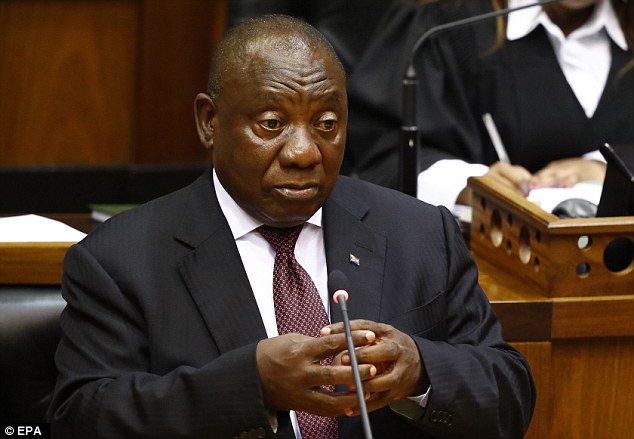 According to President Cyril Ramaphosa, who himself farms cattle on a 5,100 hectare ranch, the white community that makes up eight percent of the population 'possess 72 percent of farms'.

In contrast, 'only four percent' of farms are in the hands of black people who make up four-fifths of the population.

The stark disparity stems from purchases and seizures during the colonial era that were then enshrined in law during apartheid.

The President asked Secretary of State Mike Pompeo to monitor 'farm seizures and the killing of white farmers' in South Africa, announcing this in an early morning tweet

People place white crosses, representing farmers killed in the country, at a ceremony at the Vorrtrekker Monument in Pretoria, South Africa

In July, Ramaphosa said the ruling African National Congress party would amend the constitution so the state could start to expropriate land without compensation to speed up the process of land redistribution, but that has not yet happened and no land has been seized.

A fringe group of the white minority claims land reform will inspire violent attacks, though experts say farm attacks reflect the country's generally high crime rate and are on the decline.

Claims of 'genocide' against white South Africans, however, have been picked up by some white nationalists in the U.S., and leaders of a right-wing South African group traveled to the U.S. in May to lobby officials about the alleged targeting of white farmers.

Trump's tweet was quickly lambasted by many in South Africa, with one top ruling party official, Zizi Kodwa, telling the Associated Press that Trump has never experienced apartheid and doesn't know its legacy of stark inequality.

Nauert toned down Trump's language suggesting that massive land seizures were underway and did not repeat the president's suggestion that large numbers of white South African farmers had been killed.

Trump's tweet did find support among some South Africans, while some farmers spoke out about their security concerns. 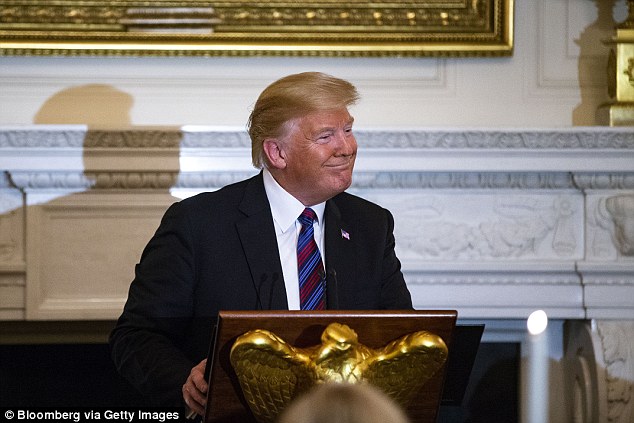 'We try very hard not to go and live in a walled security area somewhere, but it costs a lot of money in the first place to have the necessary security,' said Leon Sholtz, a farmer in Broederstroom in North West province.

'It is fact that we have lost four of our neighbors in the last 10 to 12 years due to farm murders. ... I think it is something that the government should look into and try and stop as soon as possible.'

South Africa's ruling African National Congress (ANC) wants to change the constitution to allow the expropriation of land without compensation.

Here are the key issues in the debate.

WHAT NEEDS TO BE ADDRESSED?

South Africa has a history of colonial conquest and dispossession that pushed the black majority into crowded urban townships and rural reserves.

The 1913 Native Lands Act made it illegal for Africans to acquire land beyond these reserves, which became known as 'Homelands'.

While blacks account for 80 percent of South Africa's population, the former homelands comprised just 13 percent of the land. The traditional leaders that oversaw the homelands still hold significant sway.

Estimates vary but the consensus is that most privately owned land remains in white hands, making it a potent symbol of the wider economic and wealth disparities that remain two decades after the end of white-minority rule.

WHAT HAS BEEN DONE?

Since the end of apartheid in 1994, the ANC has followed a 'willing-seller, willing-buyer' model under which the government buys white-owned farms for redistribution to blacks. Progress has been slow.

Based on a survey of title deeds, the government says blacks own four percent of private land, and only eight percent of farmland has been transferred to black hands, well short of a target of 30 percent due to have been reached in 2014.

AgriSA, a farm industry group, says 27 percent of farmland is in black hands. Its figure includes state land and plots tilled by black subsistence farmers in the old homelands.

Critics allege that many farms transferred to emerging black farmers have failed because of a lack of state support, an allegation Ramaphosa denies.

HAIL TO THE CHIEFS

The 17 million people who reside in the former homelands, a third of the population, are mostly subsistence farmers working tiny plots on communal land.

Critics of ANC land policy say that instead of seizing farmland from whites, such households should be given title deeds, turning millions into property owners. Reformers in the ANC have signalled their support for such a policy.

Tribal chiefs were not amused, and warned the ANC in July to exclude territory under their control from its land reform drive. The Zulu King evoked the Anglo-Zulu war and the spectre of conflict over the issue.

Markets and investors are wary because of concerns about wider threats to property rights. The rand fell sharply and government bonds weakened after Ramaphosa's announcement.

Yet analysts say South Africa is unlikely to follow the route of Zimbabwe, where the chaotic and violent seizure of white-owned farms under former president Robert Mugabe triggered economic collapse.

ANC officials have said unused land will be the main target.

Still, the risks are substantial. South Africa feeds itself and is the continent's largest maize producer and the world's second-biggest citrus exporter.

Analysts say the ANC wants to appeal to poorer black voters, the core of the ANC's support, ahead of elections next year.

The move also cuts into the platform of the EFF party, headed by firebrand Julius Malema, who has made land expropriation without compensation his clarion call.

Trump's comments inflamed the high-octane debate on land, a country that remains deeply racially divided and unequal nearly a quarter of a century after Nelson Mandela swept to power at the end of apartheid.

Violent crime is a serious problem across South Africa and 47 farmers were killed in 2017-18, according to statistics from AgriSA, an association of agricultural associations. However the same figures show that farm murders are at a 20-year low. 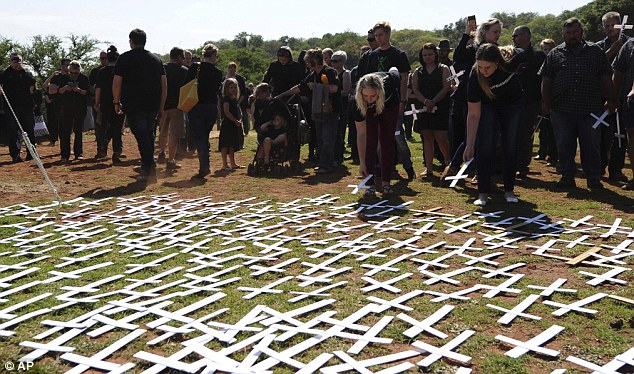 But the issue has been a focus of outrage by right-wing organisations in South Africa and abroad.

Afriforum, which mostly champions white people's rights in South Africa, has said it will intensify its campaign to inform the international community regarding the threat to property rights and farm murders in SA.

Some legal experts argued there was no need to amend the constitution because Section 25 states that if land is taken from a property owner, 'compensation ... must be just and equitable.'

To some, 'just and equitable' could mean no compensation, depending on the circumstances in which previous occupants or owners were deprived of or removed from the land, either in British colonial times or under apartheid.

Ramaphosa has said South Africans are taking part in public hearings on land reforms that are being held countrywide, as they wanted the constitution to make clear when compensation was or was not justified.

The ANC is then expected to take its proposal to parliament, where a two-thirds majority is needed to change the constitution. Together with the leftist Economic Freedom Fighters (EFF), it has more than enough votes in the 400-seat parliament to effect the change.